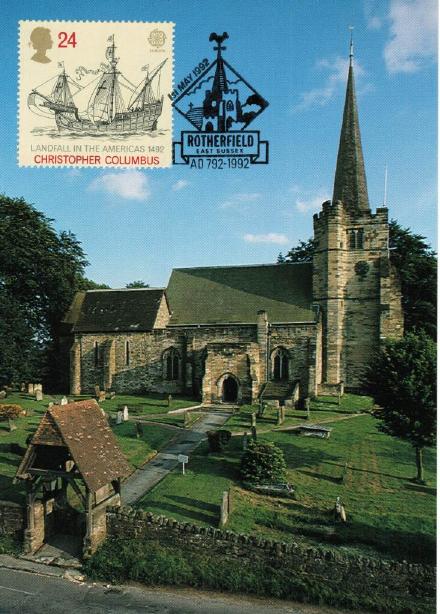 A good starting point for a more detailed understanding of the history of Rotherfield would be Catharine Pullein's book "Rotherfield: The story of Some Wealden Manors" published in 1928. For people undertaking research into Rotherfield I have compiled a list of essential material below:

Rotherfield means "the open country where the horned cattle feed". The Anglo-Saxon word "hrither" evolved into the Middle English word "rother" meaning horned cattle. It was originally one of just a few clearings formed in the dense Sussex weald (forest).

Sussex (meaning South Saxons) had been settled by the Saxons in the late 5th century with the first arrival said to have been in AD477. The siege and massacre at Pevensey in AD491 is notable as the last of the written history of Sussex at that time until AD607, when it is reported that Ceolwulf of Wessex fought against the South Saxons. Sussex came to be dominated by Wessex (the West Saxons) and by the early AD770s had become part of the kingdom of Wessex. The written history of Rotherfield begins circa AD790 when the Saxon "duke", Berhtwald, gifts his estate called "Ridrefeld" to the Abbey of St Denys in Paris, France. Hence the dedication of the church in Rotherfield to St Denys, a patron saint of France. The church and lands were taken back from the Abbey soon after the Norman Conquest in 1066 but the church is still known today as Rotherfield St Denys.

The oldest part of the present sandstone church is said to date back to about 1060 with additions in the 11th, 12th and 13th centuries. The tower and porch were added in the 15th century, although the spire was destroyed in the Great Storm of 1987 and has since been rebuilt. Refer to the church website for a detailed history: http://www.stdenysrotherfield.org.uk/stdenyshistory.htm

In the church yard stands an ancient Yew tree certified to be about 1500 years old which would have been a landmark in the village even in 1530, the year we first find evidence of the Barber alias Nynnes in Rotherfield. Traditions regarding the Yew tree as a symbol of eternal life (death and re-birth)  can be traced back to Celtic, Anglo Saxon and Nordic cultures. It is said that the Druids planted Yew trees on their temple sites in Britain and that the practice was simply absorbed by Christianity when it arrived in Britain.

Christianity was introduced to Britain in the 6th century and evolved as part of the Roman church under the authority of the pope. In 1531 there was a major split from the Roman church when Henry VIII established the Anglican Church (or Church of England). This was when the clergy of England recognized Henry VIII as the head of the church, replacing the Pope. That same year, John Nynne alias Barber was appointed churchwarden at Rotherfield St Denys.

The Barber alias Nynnes made a significant contribution to the church of Rotherfield St Denys during the next 100 years. There were four generations of father to son churchwardens:

George Nynne alias Barber was one of the churchwardens when a new bell was made for the church and it has his name on it: "Georg Barber, Edmund Knell, Wardens 1603". It survives today and is the fifth bell in a peal of eight.

On 5 September 1538 Thomas Cromwell, Henry VIII's Vicar General, ordered that each parish priest must keep a book and that the Parson, in the presence of the wardens, must enter all the baptisms, marriages and burials of the previous week. The surviving records are now a treasure trove for genealogists.

The reign of "Bloody Queen Mary" 1553-1558 had a great impact on the village of Rotherfield. Queen Mary sought to reintroduce Catholicism in England and three citizens of Rotherfield were burnt at the stake in Lewes for their Protestant beliefs. Two of these citizens were from the Ashdown family, a surname with a long history in Rotherfield and one that is often mentioned in the same manorial records where we find the Barbers. This would surely have been a dark period for the village and there is a gap in the church baptism, marriage and burial registers between 1555 and 1558 due to the upheaval. Further reading on the Sussex martyrs is recommended to get an appreciation of these times ("Sussex Martyrs of the Reformation" by Edward T. Stoneham (1983) is interesting reading).

The Gunpowder Plot of 1605 was almost a sequel to the reign of Bloody Queen Mary because of its link to Catholicism and was an event that resounded throughout England. In this plot Guy Fawkes attempted to assassinate King James by blowing up the House of Lords during the State Opening of England's Parliament on 5th November. It was to be a prelude of a popular revolt in the Midlands during which King James's nine year old daughter Elizabeth was to be installed as the Catholic head of state. The principal Jesuit of England was implicated and the government made much of the Catholic connection in his "show trial". In 1606 the 5th of November was made a day of public thanksgiving to celebrate that the King had survived. However, it was also the focus for strong anti-Catholic sentiment, with most celebrations featuring banners declaring "no-popery" and effigies of the pope being burnt. The annual 5th of November bonfire procession through the East Sussex town of Lewes has now become legendary. In the procession you will probably see the banners of the Rotherfield and Mark Cross Bonfire Society. Many villages, including Rotherfield, also hold their own processions.

Another period of turmoil came with the English Civil War (1642-1651) where the Parliamentarians fought the Royalists and eventually won, leading to the beheading of Charles I on 30 January 1649. A period of Parliamentary rule followed from 1649 to 1653 and then a Protectorate under Oliver Cromwell's personal rule 1653-1659. The monarchy was ultimately restored in 1661 after the death of Oliver Cromwell in 1659. While there were no battles of national significance in Sussex and the impact on Rotherfield appears to have been minimal, church records were poorly kept during this period and many are now missing after being destroyed or hidden by the clergy. During 1653-1660 the registering of births, marriages and deaths was taken over by civil officers but the registers were returned to the churches following the Restoration in 1660. So the period 1642-1660 is one where many baptism, marriage and burial records may be missing or lost.

Lastly, it is worth noting that the first English settlement in the Americas occurred in 1607 when Jamestown in the Colony of Virginia was founded. This was one of the first centres of English colonisation and from this time forward emigration grew to become an attractive option for people in Sussex, especially in the 19th and 20th Centuries. When researching family history we often find whole families disappearing from the records and emigration must be considered a real possibility in these cases. 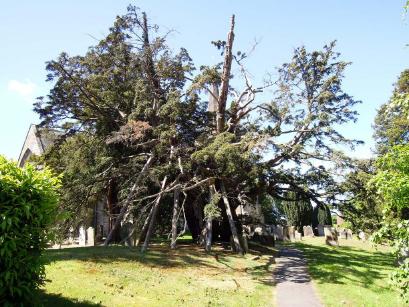 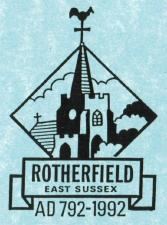