This page has been established to facilitate sharing of information with other Breach/Breech/Breche researchers.

The BREACH/BREECH surname distribution map from the 1881 census shows a strong concentration in East Sussex with the hotspot (at least in 1881) being Eastbourne. Research is showing that most of the Breachs in East Sussex go back to one family at Hertsmonceux c1550 but that at that time there was still a scattering of Breach people across Sussex suggesting that the surname had been around for some time.

A search of documents in the East Sussex Record Office cataolgue reveals occurrences of the surname going back to the 1200s. Examples are:

According to the "A Dictionary of English Surnames" (1991) by Reaney and Wilson, the surname meant "someone whose residence was near a piece of newly cultivated land". That is, a dweller at the "breach" or opening into the forest. However, there could also be a French origin (Brèche) given the early spelling Breche and the very close proximity of Eastbourne to France and the location of the Norman invasion.

The information below presents the main Sussex family tree put together so far. It remains a work in progress and the aim of presenting it here is to stimulate discussion and verification by others. Please contact me if you disagree with any of the connections and/or have further information.

A PDF copy of the book "The BREACH Wills of East Sussex 1548-1858" is available for free download on the Publications page (see main menu on the left) and contains the family trees mentioned below. 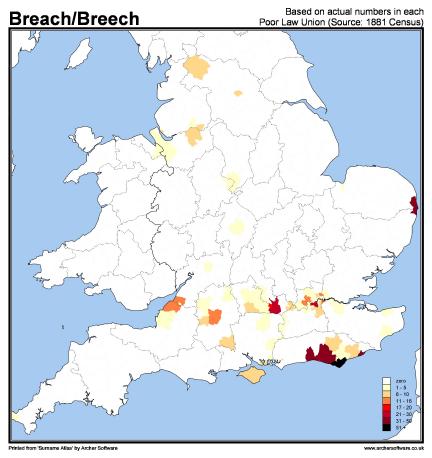 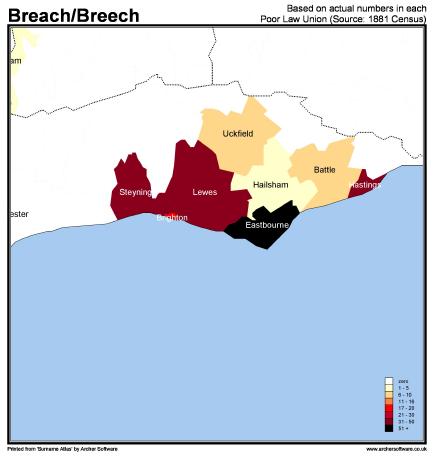 The following descendant chart is the primary BREACH family tree in Sussex. Those who left wills/admons are highlighted in yellow. This tree originates around Herstmonceux in the 1500s where it appears that there were at least four brothers, Thomas, Robert, John and Richard Breache[sic]. Nearly all the Sussex Breachs descend from Thomas (c1550-1619). There are scatterings of other Breach families in Sussex at this early time which have yet to be explored such as in the parish of Woodmancote where four individuals are identified in probates between 1553-1561.

The origin at Herstmonceux suggests a connection to the wealden iron industry in the 15th-16th century which brought much prosperity to the inland wealden towns and villages. For example, Sarah Skinner, who married John Breach in 1729 at Dallington, had a grandfather Richard Skinner who was the iron founder at the furnace at Ashburnham 1676-88 (see Wealden Iron Research Group website). This has not been expored in any depth though.

From Herstmonceux there are two main branches:

Another major resource for Breach/Breech researchers is Alison Vainlo's blog, particularly for those associated with the Eastbourne group.

The following descendant charts are for families which I have not been able to connect to the main trees due to lack of information. Any help you can offer to sort these out will be much appreciated.

In the 1500s and 1600s there are a number of families in East Sussex with the surname BREECHER/BREACHER/BRECHER/BRITCHER. It is not a surname that lasts and in the Sussex Marriage Index there are only two marriages involving this surname after 1700. The surname may have simply died out, or it may have gradually became "BREACH", although I haven't seen any evidence for this yet. There were a group of wills for these BREECHERs allowing a small tree to be put together. The tree is given below: