Pedigree
John Mitchell and Ann Norton obtained a marriage licence on 27 April 1685 at Archdeaconry of Lewes, Lewes, Sussex, England, John is gent from Henfield; Ann is spinster from Hurstpierpoint. 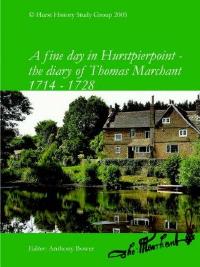 Synopsis
"     various household goods to wife ELIZABETH to pass to son James at her death
"     £5 each to children (Thomas, Elizabeth Soale, SARAH MARCHANT, Mary Berry) that they may buy Mourning
"     £10 p.a. to Mary Berry if her husband should predecease her
"     Averys (in tenancy of son Thomas) left to youngest son James together with Steels at Sayers Common
"     residue of estate left to son James
(Transcribed and annotated by the Hurst History Study Group www.hurst-hsg.net.)
Thomas Norton was buried in 1745 at Holy Trinity, Hurstpierpoint, Sussex, England, either 8 Jul 1745 or 18 Oct 1745 (there are two burials for a Thomas Norton in 1745.)3
Thomas Norton died in 1745 at Hurstpierpoint, Sussex, England.
His estate was probated on 28 June 1746 at Lewes, Sussex, England.2

People mentioned in the will

Synopsis
"     £100 each to two children of WILLIAM MARCHANT
"     £40 to wife Margaret plus annuity of £20
"     Horns/Ebbets to brother James
"     Berryland to brother James
"     Newhouse Expectant to Philip Soal upon death of Thomas's aunt Elizabeth Norton plus Stuckles, Tuckfield and Albourn Expectant all to be sold to cover Thomas's debts and legacies - the residue to go to Philip
"     Use of his house to his wife together with household goods
(Transcribed and annotated by the Hurst History Study Group www.hurst-hsg.net.)
Thomas Norton died in July 1758 at Hurstpierpoint, Sussex, England.
His estate was probated on 29 July 1758 at Lewes, Sussex, England.3

Pedigree
Rebecca Steel married James Norton, son of Thomas Norton and Elizabeth Smith, on 22 June 1752 at Newtimber, Sussex, England, James of Hurstpierpoint; Rebecca of the same parish.1
As of 22 June 1752, her married name was Norton.