b. circa 1730, d. 1810
Pedigree
Mary Thomas was born circa 1730 at Sussex, England.
Mary Thomas married Thomas Godden, son of Thomas Godden and Elizabeth Hollingham, on 5 April 1758 at Westmeston, Sussex, England.
As of 5 April 1758, her married name was Godden.
The Sussex Marriage Index was searched 1700 to 1738 and the following marriages found:
10.4.1737 Thos Godden of St Johns, Lewes, and Eliz Hollingham at Kingston by Lewes.
27.8.1710 Thos Godden of Rye & Eliz Wilson of Udimore at Mountfield.
It was condidered that Mountfield and Rye were too far away for this to be a candidate.

b. 9 August 1767, d. 28 October 1851
Pedigree
Isaac Moore was born in 1767 at West Firle, Sussex, England.
Isaac Moore was baptized on 9 August 1767 at West Firle, Sussex, England.1 He was the son of Isaac Moore and Anne Goldsmith.
The 1851 census gives Isaac's place of birth as Beddingham which is close to West Firle.2
Isaac Moore is speculated to be the father of Sarah KENNARD, base born (illegitimate) child of Ann KENNARD. The father was not recorded in the baptism register, however, one month after Sarah was born, Ann KENNARD married Isaac MOOR at Alciston, (on 9.12.1788 by banns, both of Alciston).
Isaac Moore married Ann Kennard, daughter of Robert Kennard and Rose Richardson, on 9 December 1788 at Alciston, Sussex, England.3
Isaac and Ann's son Isaac is recorded on the tithe survey of 2 Oct 1843 as living in Alciston on plot 113. The owner was Lord Gage with Isaac the occupier. The location of plot 113 is shown on these maps.4

Also shown on the 1843 tithe map are Isaac's sons Thomas (plot 123), William (plot 142, shared with William Verrall) and Robert (plot 141¾, shared with William Hudson). According to the 1841 census, Isaac is 75 years old and living with his son Thomas. Note that plot 113 was owned and occupied by Isaac Moore, possibly indicating that this belonged to the father and was perhaps where he lived in earlier times with his wife Ann (nee Kennard) and family. Also living in Thomas's household with Isaac in the 1841 census is 80 year old Ann Richardson, probably an unmarried aunt to Thomas's wife Harriet (nee Richardson).5

b. 14 May 1769
Pedigree
Mary Kennard was baptized on 14 May 1769 at Alciston, Sussex, England.1 She was the daughter of Robert Kennard and Rose Richardson.

b. 1778
Pedigree
Sarah Kennard was baptized in 1778 at Alciston, Sussex, England, no date given.1 She was the daughter of Robert Kennard and Rose Richardson.
Sarah Kennard married Robert Burfield on 16 November 1798 at Alciston, Sussex, England, Robert is "of Berwick" and Sarah "of this parish."2
As of 16 November 1798, her married name was Burfield.

b. circa 1735
Pedigree
Sarah White was born circa 1735 at Sussex, England.
Sarah White married Richard Barnett, son of Richard Barnard and Elizabeth Trull, on 24 December 1760 at Thakeham, Sussex, England, surname spelt BARNARD. Both of this parish. Witnesses: Thomas Sayres and John Downer.1
As of 24 December 1760, her married name was Barnett.
A possible burial for Sarah is on 21 Sep 1822 at Goring, Sussex, "age 84 years." 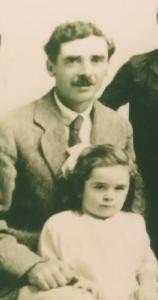 b. 1908
Pedigree
Albert Dudley Vaughan was born in 1908 at Perth, Western Australia, Australia.1 He was the son of Albert E Vaughan and Florence Mabel Brown.
Albert Dudley Vaughan was also known as Dudley.
A Pastor and superintendent of the Seventh Day Adventist Mission at Wiluna WA working with aborigines since 1953. Awarded the British Empire Medal (BEM) in 1967. His mother died in 1914 and he was reared by Archibald McCall.

b. 1911
Pedigree
Ivy Reith was born in 1911 at Perth, Western Australia, Australia.1 She was the daughter of James Reith and Frances Jane Brown.