b. 24 October 1802
Pedigree
John Cornell was baptized on 24 October 1802 at Hatfield Brod Oak, Essex, England. He was the son of George Cornell and Lydia Noake.

b. 19 October 1806
Pedigree
Milly Cornell was baptized on 19 October 1806 at Hatfield Brod Oak, Essex, England, surname CORNILL. She was the daughter of George Cornell and Lydia Noake. 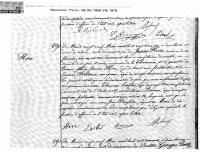 Pedigree
Samuel Nevell married Anne Gunn, daughter of Thomas Gunn and Ann Wheeler, on 23 October 1823 at Brighton, Sussex, England, both of this parish.1

b. circa 1609, d. September 1637
Pedigree
Richard Baker was born circa 1609 at Sussex, England; (based on age 23 years on marriage licence in 1632.)
Richard Baker and Anne Akehurst obtained a marriage licence on 10 April 1632 at St Matthew, London, England.
Baker, Richard, gent., bachelor, 23, and Anne Akehurst, spinster, 21, daughter of John Akehurst, late of Hedlingleigh [Hellingly], co. Sussex,
gent., deceased, consent of her mother, Mary Akehurst, of same, widow — at St. Matthew, Friday Street. 10 April, 1632. (Bishop of London's Office)
(Source: London Marriage Licences 1521-1869, edited by Joseph Foster, 1887).
Richard Baker was a yeoman in 1637.1
Richard Baker left a will made on 10 September 1637 at Hastings, Sussex, England.1
Will of Richard Baker, yeoman of Hastings, 1638
(ESRO: PBT 1/1/25/80)
Made: 10 Sep 1637
Buried: 15 Sep 1637 at Hastings St Clement
Proved: 27 Jan 1637/38
www.familysearch.org (film: 1885823; Image: 199)
In the name of God Amen The Tenth Daie of September Anno Dmi 1637 I Richard Baker of the Towne & Porte of Hasting in the County of Sussex yoman being sick of Bodie but of pfect memory (blessed be God for it) doe make & ordaine this my last will & Testament in manner & forme following That is to say First I comend my Soule into the hands of blessed God my blessed Creator undoubtedlie beleving the Remission of my Sinnes & expecting eternall Salvation only in & by the all sufficient [error deleted] satisfactorie sufferings & merritts of my most gracious Savio[u]r & Redeemer Jesus Christ And my Body to Xtien burial at the Discreation of my loving wife And for my temporall estate wherewth it hath pleased God in mercie to blesse me I dispose of it as followeth Inprimis to the poore people of the pish of St Cl[e]m[en]t in Hasting aforesaid I give Twentie shillinges to be distributed amongst them wthin one moneth next after my decease at the discreation of my Executrix Itm all my Marsh Landes wth their appurtenances in Pevensea and wartling levells or either of them called litle Lampham or by what other name or names els they be called or knowen // I give to Anne my said loving wife to hold to her & her Assignes during her naturall life and after her decease then to my eldest sonne Richard his heires & Assignes forever Item I give my Messuage or Tenemt & Crofte of Land wth thapppurtnenances in Turnebridge I give to my said sonne Richard & his heires forever Item more I give unto my said sonne Richard Twoe hundred poundes of lawfull mony of England To be paid him at his age of one & twentie yeres Item to my second sonne John I give Two hundred & fiftie poundes of like lawfull mony of England to be paid him at his like age of one & twentie yeares Item to my Daughter Mary I give the like some of Two hundred & fiftie poundes of like lawfull mony of England To be paid unto her at her like age of one & twenty yeres or daie of her mariage wch shall first happen Also I give to the Child wherewth my wif said wife now goeth the like some of Two hundred & fiftie poundes of like lawfull mony of England to be paid (if it be a sonne) at the his like age of one & twentie yeres but if it be a daughter at her like age or daie of her mariage wch shall first happen And my expresse will & meaning is That if it // please God any my said Children shall die before they come to enioye theire said sev[er]all porcons Then the Survivor & Survivors of them shall have & enioye the said Porcon & Porcons of the deceased of them equallie devided amonge them Not doubting (as I meane & desire) but that my said loving wife wilbe to give & provide for them (in the meane tyme) Christien & honest educacon & intruction in the knowledge of God & course of living &c Item I give to my loving Brother John a Twentie shillings peice of Gold in remembrance of my brotherlie love & affection towards him To be paid him wthin one moneth next after my decease & I make & ordaine my said loving wife Anne my sole Executrix of this my last will & Testamt And my loving freinds my Unkle Richard Keete Mr Richard Boys & Mr Edward Bennett Clarke Jurates of Hasting aforesaid & my said wife her mother Mrs Mary Akehurst widdow overseers thereof instantlie praying their ioynt & sev[er]all assistance & advise to my said Executrixe in the xecucon [error deleted] of the same & managing my said estate her To every of my said overseers I give a Ten shillings peice of gold in token of my love towards them To be payd wthin one moneth next after my decease In witness whereof I have hereunto sett my hand & Seale geven the daie & yeare first above written theis being witnesses
Richard Baker      Mary Akehurst Thomas Rainolds
Probate: 27th January 1637/8 to Anne Baker, relict and executrix.
(Transcribed by Claire Wickens, 7 September 2018, for Geoffrey Barber.)

b. 2 September 1610
Pedigree
Anne Akehurst was baptized on 2 September 1610 at St Clement, Hastings, Sussex, England, "Anna".1,2,3 She was the daughter of John Akehurst and Mary (?)
Anne Akehurst and Richard Baker obtained a marriage licence on 10 April 1632 at St Matthew, London, England.
As of 10 April 1632, her married name was Baker.
Baker, Richard, gent., bachelor, 23, and Anne Akehurst, spinster, 21, daughter of John Akehurst, late of Hedlingleigh [Hellingly], co. Sussex,
gent., deceased, consent of her mother, Mary Akehurst, of same, widow — at St. Matthew, Friday Street. 10 April, 1632. (Bishop of London's Office)
(Source: London Marriage Licences 1521-1869, edited by Joseph Foster, 1887).
Anne Akehurst is mentioned in the will of Richard Baker dated 10 September 1637 at Hastings, Sussex, England.2
Anne Akehurst married Richard Franck circa 1639 at England.
As of circa 1639, her married name was Franck.
Anne Akehurst witnessed the probate of the estate of Mary (?) on 2 November 1639 at Archdeaconry of Lewes, Sussex, England.4
Anne Akehurst is mentioned in the will of John Akehurst dated 6 August 1657 at Warbleton, Sussex, England.3
After the death of her second husband Richard Franck, Anne lived at Cliffe, Lewes near her daughter Mary who had married Raphe Akehurst in 1653. This is mentioned in the "Assignment of mortgage" document dated 17 Aug 1691 (ESRO: MIL 1/15/2).
Anne's burial cannot be found. Given that she was living near her daughter Mary Akehurst, a Quaker, she was probably not buried in an Anglican churchyard but in a Quaker burial ground.