b. circa 1845, d. 16 May 1918
Pedigree
Janet Martin was born circa 1845.
Janet Martin married Peter Clegg, son of Joseph Clegg and Ann Parker, in 1867 at Paisley, Victoria, Australia.
As of 1867, her married name was Clegg.
Janet Martin died on 16 May 1918 at "Heathfield", Daphne Street, Canterbury, Melbourne, Victoria, Australia.1
Janet Martin was buried on 20 May 1918 at Box Hill Cemetery, Melbourne, Victoria, Australia.1
The following death notice appeared in The Argus (Melbourne) on Monday 20 May 1918:
CLEGG -On the 16th May, at her residence, "Heathfield," Daphne street, Canterbury (late of Wandin), Janet, beloved wife of Peter Clegg, and loving mother of Frederick (Auburn), Mrs. G. Giles (Auburn). Mrs. W. Upton (Coburg), and Ernest (on active service abroad); also lov-sister of Mrs E. Clegg (W.A.), Mrs J. Whiffin, and Mrs R. Simpson; aged 73.
CLEGG. - The Friends of Mr. PETER CLEGG (late of Wandin) are respectfully invited to follow the remains of his beloved wife, Janet, to the place of ¡nternment, the Box Hill Cemetery. The funeral will leave his residence, "Heathfield", Daphne street, Canterbury, THIS DAY (Monday, 20th May). at 2 o'clock p.m. W. FERGUSON, Undertaker, Vere street, Collingwood, Northcote, and Brunswick.1 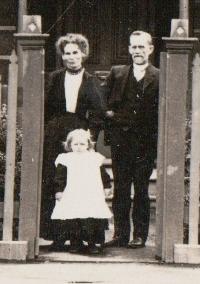 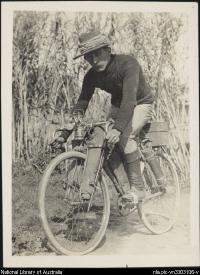 Frances Edwin Birtles was born on 7 November 1881 at Fitzroy, Victoria, Australia. He was the son of David Edwin Birtles and Sarah Jane Bartlett.
Frances Edwin Birtles married Frances C Knight in 1920 at Australia.
Frances Edwin Birtles married Nea McCutcheon in 1935 at Australia.
BIRTLES, FRANCIS EDWIN (1881-1941), overlander, was born on 7 November 1881 at Fitzroy, Victoria, son of David Birtles, a bootmaker from Macclesfield, England, and his wife Sarah Jane, née Bartlett. He was educated at South Wandin State School, and at 15 joined the merchant navy as an apprentice. In 1899 he jumped ship at Cape Town, South Africa, and tried to enlist with Australian militia, but was attached to the Field Intelligence Department as part of a troop of irregular mounted infantry until May 1902. He returned briefly to Australia, then joined the constabulary in the Transvaal as a mounted police officer. His experiences there equipped him with bushcraft skills in a semi-arid environment and he undertook several cycling and photographic excursions; his police service ended when he contracted blackwater fever.
Birtles disembarked at Fremantle, Western Australia, and on 26 December 1905 left to cycle to Melbourne, an achievement which attracted widespread attention. After brief employment as a lithographic artist, in 1907-08 he cycled to Sydney and then, via Brisbane, Normanton, Darwin, Alice Springs and Adelaide back to Sydney, where he was thereafter based. In 1909 he published the story of his feat, Lonely Lands, which he illustrated with his own photographs. That year he set a new cycling record for the Fremantle to Sydney continental crossing, then in 1910-11 rode around Australia. In 1911 he was accompanied from Sydney to Darwin by R. Primmer, cameraman for the Gaumont Co.: Across Australia was released next year. Birtles had continued on to Broome and Perth, then lowered his record by riding from Fremantle to Sydney in thirty-one days. By 1912 he had cycled around Australia twice and had crossed the continent seven times.
Birtles next turned to the motor car and in 1912 completed the first west-to-east crossing of the continent with Syd Ferguson and a terrier, Rex, in a single-cylinder Brush car. In 1914 with Frank Hurley as cameraman he made Into Australia's Unknown (1915); next year he retraced their route and was responsible for the film Across Australia in the Track of Burke and Wills; in 1919 he made Through Australian Wilds, following by car the track of Sir Ross Smith. On his many other trips, with companions such as his brother Clive, he shot much film footage.
On 27 November 1920 at St Paul's Cathedral, Melbourne, he married Frances Knight; they soon separated and she divorced him in 1922. In 1921 he and his companion Roy Fry had been extensively injured when his car caught fire near Elsey station while he was employed by the Prime Minister's Department on a survey mission for the proposed north-south railway to Alice Springs; he later finished the survey by air. In 1926 he set motoring records from Melbourne to Darwin and Darwin to Sydney (seven days) in a Bean car named 'The Sundowner'. By mid-1927 he had completed more than seventy transcontinental crossings. Impecunious, he depended on manufacturers to sponsor his expeditions and wrote about many of his journeys for newspapers and periodicals.
In July 1928 Birtles became the first person to drive from London to Melbourne, a nine-month part-solo journey completed in 'The Sundowner' which he donated in 1929 to a proposed national museum in Canberra. With M. H. Ellis he undertook an unsuccessful search for L. H. B. Lasseter. In the Depression he spent several years gold-prospecting in arid areas and discovered a payable gold-mine in 1934. On 11 February 1935 at St Mary's Cathedral, Sydney, he married Nea McCutcheon. That year he published Battle Fronts of Outback (Sydney).
Survived by his second wife, Birtles died at Croydon of coronary vascular disease on 1 July 1941 and was buried in the Anglican section of Waverley cemetery.
Select Bibliography
M. H. Ellis, The Long Lead (Lond, 1927); T. R. Nicholson, The Trailblazers (Lond, 1958), and Five Roads to Danger (Lond, 1960); I. Bertrand, ‘Francis Birtles — cyclist, explorer, Kodaker’, Cinema Papers, Jan 1974; private information. More on the resources

b. circa 1758
Pedigree
George Hodges was born circa 1758 at England. He was the son of Henry Hodges and Mary Appleby.
George Hodges married Mary House on 25 November 1776 at Charlton Adam, Somerset, England.

Pedigree
Hannah (?) married Robert Masters, son of Thomas Masters and Ann Stokes, circa 1734 at Somerton, Somerset, England.
As of circa 1734, her married name was Masters.

b. 1717
Pedigree
William Bartlett was baptized in 1717 at Canford Magna, Dorset, England. He was the son of Samuel Bartlett and Mary Inman.
This person may not be part of the family - needs to be checked. 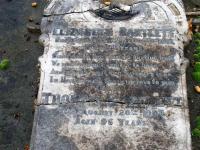 Pedigree
Elizabeth Driver married Thomas Masters circa 1680 at England.
As of circa 1680, her married name was Masters.