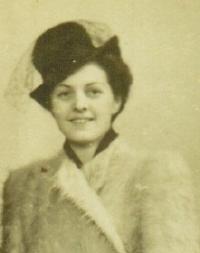 Dorothy Edith Etherton was born on 28 September 1921 at Brighton, Sussex, England; Date of Birth from GRO Deaths Index.1 She was the daughter of Frederick Jeffree Etherton and Violet Carrie Elsie Marchant.
Dorothy Edith Etherton also went by the name of Dorry.
Dorothy Edith Etherton married Desmond Joseph Greer in 1944 at Hastings, Sussex, England.2
As of 1944, her married name was Greer.
Dorothy Edith Etherton married Robert William Lucas in 1980 at Chichester, Sussex, England.3
As of 1980, her married name was Lucas.
Dorothy Edith Etherton died in October 1994 at Hove, Sussex, England, at age 73.4
Helen Fenton (nee Green) writes: Dorothy was quite close to her sisters, Vi and Molly. They would do their knitting and watch English soap operas together, Coronation Street and Crossroads! Even though I was only a few years old, I do remember this phenomenon quite well! Even the theme tunes to these ‘ghastly’ television programmes have stuck in my mind! They cooked the most delicious Sunday roast dinners! I can taste the gravies, Yorkshire puddings, the crispy roast potatoes and all the other perfectly-prepared vegetables as I write! At Christmas time, the mouth-watering mince pies they made were crafted from pastry to die for! There were brightly-lit Christmas trees, always superbly decorated…and there was snow, yes SNOW! Living in Africa, the sight of freshly-fallen, crispy-white snow is something that I will never again take for granted, as I am certain neither would you…. But, on the contrary, picture this: Brighton Beach, lots of funny-looking piers.. and these huge, ugly black pebbles that hurt your feet as you trundle along the shore-line in your flip flops, scrunching your lilly-white toes as they try to establish a firm foothold on those pebbles… that’s enough to send anyone packing for Perth or an African Safari don’t you think? Perhaps a bit of humour for us to consider!
Dorothy also loved her Guinness! She was very ‘glamorous’, always looked very striking and pretty and she was extremely artistic and creative. She taught me how to paint with water colours when I was four years old. She loved dogs and had two white poodles. She used to have them groomed quite regularly and they would come back from the dog parlour full of ribbons and bows! I used to feel quite sorry for them at the time, since I felt that they really weren’t comfortable all dolled up like that! Nevertheless, Dorothy was a force to be reckoned with. No one would dare cross her for fear of a tongue lashing! People also seemed to have eaten a lot of corned beef in those days! Dorothy used to make me corned beef sandwiches when I was staying over at her house…I absolutely hated corned beef!
A strong and determined lady was Dorothy, and she would take nothing lying down… Desmond, on the other hand, was quite a softie… He was also very creative, and was very involved in his music. He owned a pink Kombi van that was used to carry all the band equipment around. This sticks in my mind as I could never understand why the van had to be pink and not a more masculine colour! Sometimes, he would play in various pubs around Sussex and take me along with him for the ride, so to speak. At age five, I wasn’t allowed in any pubs of course, but, I would play outside at each venue and ask Granddad Des if I could have a Cadbury’s Dairymilk chocolate and a glass of Babycham! The chocolate was never a problem, but I wasn’t allowed the Babycham! But, instead, Des would bring me a champagne glass filled with lemonade with a small cherry on a toothpick, nicely arranged to look like a real Babycham, and I used to enjoy this tremendously! Des always had an ‘alternative’ image, set of behaviours and dress sense. He was quite theatrical, very arty and rather nutty actually! I absolutely loved him to bits and he and I were very close as I was his first grandchild. My uncle, David Greer, was also involved in music and played guitar. His musical style was more along the lines of singing and playing ballads. I don’t know much more about David except that he first married a lady by the name of Val, around the same time that my mother married Tom. David and Val had two sons, Martin and Marcus. They were then divorced and David remarried a lady by the name of Linda and they had at least two daughters, Kelly and Kirsty Greer. Denise may be able to enlighten us further here. Denise and David never really saw eye to eye, hence, again my lack of knowledge here.

b. 1916
Pedigree
Donald Marchant was born in 1916 at Brighton, Sussex, England. He was the son of Cecil Edwin Philip Marchant and Ellen Jane White. 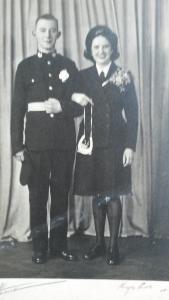 b. 25 March 1879, d. 10 March 1940
Pedigree
Frederick Deacon was born on 25 March 1879 at Kingston upon Thames, Surrey, England.
Information from Joan, daughter of Maria Sarah Marchant:
Ellen Jane Marchant (nee White) met Frederick Deacon when she was visiting her children Donald, Gladys & Rose in the workhouse. Frederick Deacon's children were also there. They had two children: Maria Sarah (Sally as she was known) and a son called Thomas. Ellen Jane left them all, including her children, with Frederick Deacon. Daughter Maria Sarah Marchant did not remember her very much.
After Frederick died Gladys or Rose took Maria in to work for them which didn't go too well, and she left them to join the Wrens. I know she kept in touch with Donald when he was a prisoner of war in Italy and lost contact with him when they transferred him to Italy. We tried to find him through the Ministry of Defence but apart from telling us that he was alive they would tell us nothing else.
Maria was brought up as Sarah Deacon. She only found out she was a Marchant when she joined the Wrens, and that Cecil was named as her father. Her brother Thomas was registered in the name of White which Maria found out when he died. Why Ellen Jane did this and did not register them as Deacon's I do not know. Maria was definitely a Deacon, adored her father and so was Thomas. She was very close to Donald but not so much to the girls. I gather that Florence is the one she called Rose but I know nothing of William.
Frederick Deacon died on 10 March 1940 at Brighton General Hospital, Brighton, Sussex, England, at age 60.