Richard Marchant died on 30 July 1866 at Hospital, Brighton, Sussex, England, at age 78. He died of inflammation of bladder and disease of kidneys, age 79 years.7

The Will of William Marchant late of Brighthelmston within the Archdeaconry of Lewes Mariner deceased was proved the twenty second day of March one thousand seven hundred and seventy three before the Reverend Robert Austin Clerk Surrogate and so forth upon the oath of Susanna Standing widow the sole Executrix in this said Will named To whom was committed the administration of the goods being first sworn well and faithfully to administer the same And also that the said Goods of the said deceased do not amount unto twenty pounds
(Transcribed by Diana Mitchell 2008.)
William Marchant died in 1772 at Brighton, Sussex, England.
William Marchant was buried on 6 November 1772 at St Nicholas Church, Brighton, Sussex, England, age 77 years.6

b. circa 1670
Pedigree
Ann Jacket was born circa 1670 at England.1
There is no baptism for Ann in the Sussex Familiy History Group's baptism index. The name Jacket does seem to be localised to Brighton however.
There is a baptism of a Nicholas Jackett to Thomas and Ann Jackett on 6 Apr 1679 in Brighton. This may be where the name Ann originated. There is also the burial of Ann Jacket, wife of Thomas on 17 Mar 1696 at Brighton.
The only possible marriage for this Thomas and Ann Jacket in the Sussex Marriage Index is 27 Dec 1667 Thomas Jacket and Agnes Frend at Brighton.1
A Thomas Jacket is mentioned in the following will in 1671, which identifies where he lived:
John Page, Plumpton, Sussex. Will Made 29 Dec 1671
John Page of Plumpton, Sussex fuller
John Page my only son
Ellener my well beloved wife (sole executrix)
a house faceing to the East Street in Brighthelmestone in the tenure of Edward Cook, Thomas Jacket and Francis Masters
Robert Wildbee als Wildboare?
John Page the second son of my brother Joshua Page of ...llington* in the County of Sussex
my loveing freindes John Lopdell of Lewes Gent and John Picknoll of Plumpton both in the said County of Sussex to be my overseers
29th December 1671. John (JP) Page his marke
Published and declared signed and sealed before John Picknoll; Joshua Paige
*NOTE: The first 2 or 3 letters of this place name are unreadable, places ending with ‘llington’ are Dallington, Hollington, Lullington. Sullington & Tillington. DW
(Transcribed from a photocopy by Dave Woolven, 12 August 2008 for John Kenton-Page.)2
Ann Jacket married William Marchant, son of Richard Marchant and Mary (?), on 27 July 1692 at St Nicholas Church, Brighton, Sussex, England, surname spelt MARCHAN.3
As of 27 July 1692, her married name was Marchant. 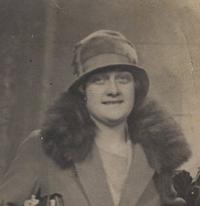