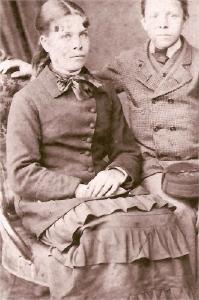 b. 1890
Pedigree
Charles William Richard Bateman was born in 1890 at England. He was the son of Charles Thomas Bateman and Mary Jane Stone.

b. 2 July 1895
Pedigree
Winifred Alice Bateman was born on 2 July 1895 at Weymouth, Dorset, England. She was the daughter of Charles Thomas Bateman and Mary Jane Stone.

b. circa 1853
Pedigree
Mercy Bailey was born circa 1853 at Hampstead, Middlesex, England.1 She was the daughter of James Bailey.
Mercy Bailey married William James Wilson, son of James Fogo Wilson and Emma Barber, on 30 July 1878 at Holy Trinity, Kilburn, Middlesex, England.2
As of 30 July 1878, her married name was Wilson.
On 2 April 1911 Mercy Bailey and William James Wilson lived at 24 Drakefield Rd, Upper Tooting, London, England.3

Pedigree
Jane Hadlow married John Waite, son of Edward Waite and Elizabeth (?), on 10 May 1710 at East Malling, Kent, England.1
As of 10 May 1710, her married name was Waite.
John Waite's probate was investigated by Gillian Rickard who found that administration of his estate was granted to his wife Jane, with a probate inventory dated 14 February 1732 and presented to the court on 22 March 1733. It survives amongst the records of the Archdeaconry Court of Rochester (Kent History Centre: Dra/Pi 16/8). The value of his estate came to £505 6s 6d, a large sum for the time (being the eldest surviving son of an eldest surviving son probably helped!). A detailed inventory of his estate apparently survives, but has not been sighted although it is mentioned in Chalklin's 1962 paper "The Rural Economy of a Kentish Wealden Parish 1650-1750".2

b. 1720
Pedigree
John Waite was baptized in 1720 at Tonbridge, Kent, England. He was the son of John Waite and Jane Hadlow.

b. 1722
Pedigree
Jenny Waite was baptized in 1722 at Tonbridge, Kent, England. She was the daughter of John Waite and Jane Hadlow.

b. 8 October 1656
Pedigree
Henry Hunt was baptized on 8 October 1656 at Hadlow, Kent, England.1 He was the son of William Hunt.
Note that the baptism record does not give his first name. However, the will of his sister Hannah Gilpin (nee Hunt) mentions a brother, Henry, so this could be his name.2
Henry Hunt married Martha Russell on 8 September 1687 at Chatham, Kent, England.3
Daughter Elizabeth is also mentioned in Hannah Gilpin's will. Note that there is a baptism of an Elizabeth Hunt on 21 Dec 1690 to Henry Hunt and Elizabeth at Bapchild, Kent. The marriage to Margaret Russell is not certain - further work required.4

d. 1691
Pedigree
Thomas Blackwell married Hannah Hunt, daughter of William Hunt, on 30 August 1684 at St George the Martyr, Southwark, Surrey, England.1
Thomas Blackwell was a yeoman in 1691.
Thomas Blackwell died in 1691 at Swanscombe, Kent, England.
Thomas Blackwell left a will made on 24 August 1691 at Swanscombe, Kent, England.2
The will does not mention any children, suggesting that there were none. His wife Hannah is appointed Executor.
His estate was probated on 22 September 1691 at Prerogative Court of Canterbury (National Archives: PROB 11/405/412.)
An inventory of his estate is held at the The National Archives (PROB 4/21950) but is not available in digital form.