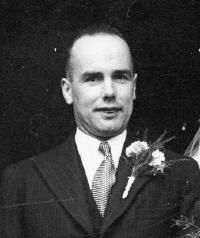 George Thomas Carter at his wedding in Brighton in 1946

b. 1908
Pedigree
Horace Stephen Seamer was born in 1908 at Brighton, Sussex, England.1 He was the son of William Seamer and Rhoda Grace Ellis.

Edward Waite left a will made on 30 November 1675 at Leigh, Kent, England.3
"Edward Wayte of Leigh next Tonbridge, yeoman, ‘at present of reasonable good health of body ... considering the frailty of my nature and the uncertainty of my life’ make this my testament and last will. My body to be buried as my executor shall think fit. I give to Anne my dear and loving wife for life the yearly sum of £5 to be paid to her or her assigns yearly and every year from and after my decease on the feast days of the nativity of our lord and saviour Jesus Christ [25 December], the annunciation of the blessed virgin Mary [25 March], the Nativity of St.John the Baptist [24 June] and St.Michael the Archangel [29 September] by equal portions by my executor, the first payment to be made on that feast day above named that shall next happen after my decease if she be then living. I will my executor shall within one year after my decease enter into obligation of the penal sum of £100 and thereby bind him, his heirs, executors and administrators to the said Anne and her executors and administrators according to law for the true payment of the said yearly sum of £5. I give to Edward Wayte, William Wayte and John Wayte, my three sons, and to Anne my daughter, wife of William Mugredge, and to Elizabeth my daughter, wife of John Waghorne als Twyte (for whose several preferments I have already given to or with them such several portions already as my estate would afford) £5 apiece to be paid to each of them within one year after my decease by my executor. I give to Mary Wayte, my daughter, £35 to be paid to her within one year after my decease by my executor. I make Richard Wayte my eldest son full and sole executor and for and towards the payment of my debts and legacies, funeral charges, charges of probate of my testament and last will I will, give and leave to him all my goods, cattle [capital], corn, household stuff, leases, credits, personal estate and chattels whatsoever.
[signed] Edward Wayte.
Witnesses: William Foord, Geo: Hooper.
Probate granted at Tonbridge 29 March 1681 on the oath of Richard Wayte, the son and executor named."
Edward Waite died in 1680 at Leigh, Kent, England.
Edward Waite was buried on 23 December 1680 at Leigh, Kent, England.5
His estate was probated on 29 March 1681 at Tonbridge, Kent, England.

b. 15 May 1642
Pedigree
Anne Waite was baptized on 15 May 1642 at Leigh, Kent, England.1 She was the daughter of Edward Waite and Anne (?)
Anne Waite married William Mugridge on 13 February 1671 at Penshurst, Kent, England.
As of 13 February 1671, her married name was Mugridge.
Note that there is a baptism of a Benjamin Muggradge on 29 Mar 1670 at Tonbridge to William Muggradge (no mother given). Has this been transcribed incorrectly as it is before the marriage date?2
Anne Waite is mentioned in the will of Edward Waite dated 30 November 1675 at Leigh, Kent, England.3
On 8 November 1683 Anne Waite and William Mugridge lived at Tonbridge, Kent, England, surname spelt "Mogeridg."4
Anne Waite is mentioned in the will of Richard Waite dated 8 November 1683 at Leigh, Kent, England.4
There is a will for Mary Waite, spinster of Tonbridge, proven 7 Sep 1791 in which one of the beneficiaries is Sarah, wife of John Mugridge, tallow chandler of Tonbridge Town. A Thomas Mugridge, tallow chandler, and a kinsman, Samuel Waite, are also mentioned as beneficiaries. This is likely connected to this branch of the family.
Note: John Mugridge married Sarah Simmons on 19 May 1772 at Tonbridge.5,6

Pedigree
William Mugridge married Anne Waite, daughter of Edward Waite and Anne (?), on 13 February 1671 at Penshurst, Kent, England.
On 8 November 1683 William Mugridge and Anne Waite lived at Tonbridge, Kent, England, surname spelt "Mogeridg."1
William Mugridge is mentioned in the will of Richard Waite dated 8 November 1683 at Leigh, Kent, England.1
There is a will for Mary Waite, spinster of Tonbridge, proven 7 Sep 1791 in which one of the beneficiaries is Sarah, wife of John Mugridge, tallow chandler of Tonbridge Town. A Thomas Mugridge, tallow chandler, and a kinsman, Samuel Waite, are also mentioned as beneficiaries. This is likely connected to this branch of the family.
Note: John Mugridge married Sarah Simmons on 19 May 1772 at Tonbridge.2,3

b. 27 December 1688, d. 1776
Pedigree
Thomas Waite was baptized on 27 December 1688 at Leigh, Kent, England.1 He was the son of Edward Waite and Elizabeth (?)
Thomas Waite married Ann (?) circa 1723.
Thomas Waite married Mercy Hayward, daughter of Thomas Hayward and Sarah (?), on 3 January 1732/33 at East Barming, Kent, England, Thomas a yeoman of Leigh.2
In 1750 Thomas Waite was the tenant farmer of the farm called Clarks (now Home Farm).3
Thomas Waite left a will made on 25 August 1775 at Leigh, Kent, England.4
Will of Thomas Waite, [copy of] will dated 25th August 1775     (TRANSCRIPTION)
In the Name of God Amen I Thomas Waite of Leigh next Tonbridge in the County of Kent Yeoman being aged and infirm but of a sound and disposing mind memory and understanding praised be almighty God for the same do therefore make and ordain this my last Will and Testament in manner and form following (that is to say) first and principally I resign my soul into the hands of almighty God that
[page 2]
gave it and my Body I commit to the Earth to be decently buried at the discretion of my Executor herein after named and as to the Temporal Estate which it hath pleased Almighty God to bless me with I give devise and dispose thereof as followeth and first I will order and direct that all my Just Debts Legacies Funeral Expences and the probate of this my Will shall be first paid and discharged also I give and bequeath unto my son Edward Waite all my Household Goods and Furniture and all my live stock Cattle Chattels Implements and Personal Effects whatsoever Situate and being on my said Farm in Leigh aforesaid together with the Possession of the said Farm Also I give and bequeath unto my two Daughters Mary Bennet and Ann Cole the sum of thirty pounds a piece of lawful Money of Great Britain Also I Give and Bequeath to my Daughter Elizabeth Seale the sum of five pounds of like Money and I will the said Legacies shall be paid to them respectively at the end of three months next after my decease Also I give and bequeath unto my Grandson Edward Waite son of my said son Edward Waite the sum of Ten Pounds to be paid him by my Executor at his age of twenty one years also I give and devise unto my son Thomas Waite all my Farms Lands and Hereditaments and all my Tythes and Tenths of Corn Grain Hay and other Tythes and Tenths whatsoever situate lying, being, growing and arising within the said parish of Leigh and all other my Lands Hereditaments and Premises where ever they are situate arising and being to hold unto my said Thomas Waite his Heirs and Assigns for ever subject to the payment of the said Legacies given unto my said Daughters and Grandson as aforesaid Also/ After my said Will is so far complyed with what then remains of my Estate as well real as personal that I shall dye possessed of or Interested in I give and bequeath the same unto my said son ThomasWaite his Heirs and assigns and I Nominate Constitute and Appoint my said Son Thomas Waite to be full and sole Executor of this my last Will and Testament hereby revoking and making void all former Wills and Bequests by me at any time heretofore made In Witness whereof I the said Thomas Waite the Testator have to this my last Will and Testament set my hand and seal this twenty fifth day of August in the fifteenth year of the Reign of our Sovereign Lord King George the Third and in the year of our Lord one thousand seven hundred and seventy five. The mark of X Thomas Waite signed sealed published and declared by the said Testator as and for his last
[page 3]
Will and Testament in the presence of us who in his presence and at his request have subscribed our names as Witnesses hereto in the presence of each other
Philip Jones William Feldwick T[homas] Horton

This Will was proved at London the fifth day of March in the year of our Lord one thousand seven hundred and seventy six before the Worshipful Denham Skeet Doctor of Laws surrogate of the Right Worshipful Sir George Hay Knight Doctor of Laws Master Keeper or Commissary of the Prerogative Court of Canterbury lawfully Constituted by the Oath of Thomas Waite the son of the deceased and sole Executor named in this said Will to whom Administration was granted of all and singular the Goods Chattels and Credits of the said deceased having been first sworn duly to administer Exd
(Transcribed by Margaret Gaffney for Geoffrey Barber, 30 April 2015.)