b. 1 November 1791
Pedigree
James Weller Gladman was baptized on 1 November 1791 at Hailsham, Sussex, England, illegitimate.1 He was the son of Hannah Wenham.

b. 4 November 1810
Pedigree
William Gladman was baptized on 4 November 1810 at West Firle, Sussex, England, illegitimate.1 He was the son of Mary Gladman. 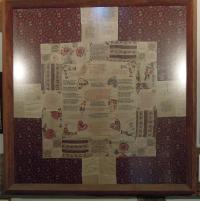 Emboidered bed cover made c1838-41 by Harriet Gladman (nee Farrant) on display at The Priest House in West Hoathly, West Sussex, England.
Harriet Farrant was born on 22 January 1812 at Framfield, Sussex, England.1 She was the daughter of Friend Farrant and Anne Thomas.
There is a piece of embroidery (a young child's bed cover) sewn by Harriet on display in the The Priest House, North Lane, West Hoathly, West Sussex. Harriet records her birth on her embroidery: "I Harriet Farrant was born January the 22th [sic] in the year of our Lord 1812 Aged 26 years 1838". The fact that she gives her age as 26 years in 1838 suggests that she started it before she was married in 1839. She would appear to have finished it in 1841 as it records an event in that year but none after.1

Harriet Farrant was baptized on 26 May 1812 at St Thomas, Framfield, Sussex, England.2
Harriet Farrant married Gideon Gladman, son of Gideon Gladman and Mary Elliot, on 15 April 1839 at St Nicholas Church, Brighton, Sussex, England.3,4
As of 15 April 1839, her married name was Gladman.
Harriet was a first cousin once removed to her husband, Gideon Gladman. Gideon's mother, Mary, was her first cousin.
Harriet recorded their wedding on her embroidery:
"I Harriet Farrant was united to Gideon Gladman at Brighton Church Monday April the 15th in the year of our Lord 1839".
"O Lord grant that we together may sweetly live
And when it shall please thee to call us to die
Grant we may each a starry crown receive
And reign above the sky.1"

On 7 June 1841 Harriet Farrant and Gideon Gladman lived at Terrible Down, Laughton, Sussex, England.5
The 1841 census mistakenly records Harriet's name as Charlott [sic]. Gideon, occupation farmer, is 28 years old and Charlott (Harriet) is 29 years. The place Terrible Down (more often called Tarble Down in legal and manorial documents) does not, as the legends would say, have its origin as the place of slaughter of remnants of the Battle of Lewes in 1264, or alternatively, a place where Alfred the Great fought the Vikings. The true origin is considerably less glamorous, with the authoritative "The Place Names of Sussex" by Mawer and Stenton stating that it probably evolved from "Tordehelle" meaning a dung hill (there was a Robert atte Tordehelle, 1296) and morphed into other variants such as Torble, Tarble and Terrible to hide its unpleasant associations.6
Harriet Farrant died on 18 December 1844 at Laughton, Sussex, England, at age 32. She died of "cerebral disease".7
Note that Harriet's husband remarried on 10 Feb 1846 as a widower, implying that Harriet died before this.
Note also that this death is easily confused with the death and burial of Harriet Gladman (nee Hockham), wife of Henry Gladman, who died 10 Nov 1843 at Laughton age 32 years. The death certificate and burial record for Harriet Gladman (nee Farrant) has not been found yet.
The fact that Harriet's mother-in-law Mary Gladman (nee Elliot) was also Harriet's first cousin was probably a factor in the survival of the embroidered bed cover and she is probably responsible for it being taken to West Sussex where it ultimately ended up in West Hoathly. The 1851 census records show Mary living with Gideon and the children after the death of Harriet in 1844 and Caroline in 1848, so she must have always been there to help Gideon as required. Mary would have valued the bed cover and probably stored it with her possessions at one point, perhaps after the children grew too big for it (if it indeed was used as a bed cover). Mary subsequently moved to Horsted Keynes to live with her daughter Mary Taylor's family, where she was living at the time of the 1861 census. She died there in 1870, age 91 years. Mary's personal possessions probably went to her daughter Mary Taylor who died in 1883 in a carriage accident at the age of 70 years (along with her husband's sister). Alternatively, if the embroidery was kept by Gideon as a reminder of his first wife, then his personal effects would have probably been left to his last (third) wife Mary Ann who died in 1918 at the Sackville College alms-house at East Grinstead, and whose executor was Mary Taylor's grandson, Charles Taylor of Horsted Keynes, according to probate records. So either way, there is a good chance that the embroidery ended up with the Taylor family in Horsted Keynes.
It is not known how the bed cover ended up at The Priest House in West Hoathly, but Horsted Keynes is only four miles away. Hopefully further investigation will reveal when and how it was acquired by the Sussex Archaeological Society (owners of The Priest House).
An article on Harriet Gladman's embroidery was published by the Sussex Archaeological Society in their magazine "Sussex Past & Present", December 2017 (issue no. 143).

By me o my Saviour stand
in every trying hour
guard me with thine
outstretched arm and
raise me by thy power
Harriet Gladman.2

b. 2 March 1834
Pedigree
James Gladman was baptized on 2 March 1834 at Ripe, Sussex, England. He was the son of Thomas Gladman and Frances Richardson.

b. 15 January 1837
Pedigree
Ann Gladman was baptized on 15 January 1837 at Ripe, Sussex, England.1 She was the daughter of Thomas Gladman and Frances Richardson.

b. 26 March 1843
Pedigree
Rufus Gladman was baptized on 26 March 1843 at Ripe, Sussex, England.1 He was the son of Thomas Gladman and Frances Richardson.

b. 19 April 1846
Pedigree
Jasper Gladman was baptized on 19 April 1846 at Ripe, Sussex, England.1 He was the son of Thomas Gladman and Frances Richardson.

b. 25 February 1849
Pedigree
Esther Gladman was baptized on 25 February 1849 at Laughton, Sussex, England.1 She was the daughter of Thomas Gladman and Frances Richardson.

b. circa 1835
Pedigree
Joseph Gladman was born circa 1835 at Sussex, England. He was the son of John Gladman and Sarah Harmer. 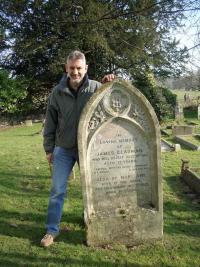