b. circa 1834
Pedigree
Emily Nell was born circa 1834 at Brighton, Sussex, England. She was the daughter of John Nell and Martha Dobson.

b. 1856
Pedigree
Mary Ann Humphrey was born in 1856 at Capel, Kent, England.1,2 She was the daughter of James Humphrey and Harriet Russell.

b. circa 1858
Pedigree
William Humphrey was born circa 1858 at Capel, Kent, England.1 He was the son of James Humphrey and Harriet Russell.

On 7 June 1841 Mary Esther Barber lived at Charles Street, Deptford, Kent, England, living with her parents and brother Samuel. No occupation given.3
It would appear that sometime between 1843 and 1846 Mary Esther Barber began a long term relationship with Hesketh Davis Wells, probably her employer as she is recorded as a domestic servant on her death certificate in 1858. Hesketh appears to have kept the relationship and the resulting six children hidden to some degree, as Mary and the children lived apart from Hesketh but in the same town of Deptford. She probably continued to work for Hesketh while living separately with her mother and the children. It is possible that Hesketh would have regarded the relationship with Mary as potentially damaging to his social and business interests, she being a lower class domestic servant, but another possibility is that his marriage settlement with his wife Mary Ann Catherine Garner (the "indenture" mentioned in her will) may have held financial disincentives for him to marry again. Perhaps the marriage settlement meant that many of the assets that his wife brought to the marriage were now held in trust for her children after her death and Hesketh only had use of the assets subject to certain restrictions and not ownership ?
Hesketh probably provided some support for the children he had with Mary Esther Barber (as the relationship lasted some time) and may have assisted the boys get a start in the shipping industry as clerks (Hesketh's legitimate son Hesketh James Wells was also a shipping clerk in 1871). Two of the boys he had with Mary, Herbert and James, were to emigrate to the USA and create significant wealth from their own shipping line, the "Barber Line".
On 30 March 1851 Mary Esther Barber lived at 15 Friendly Place, St Paul Deptford, Greenwich, Kent, England, living with her mother Esther Barber (widow) and her three children Mary, Herbert and Alice. No occupation given.2
Note that there is a marriage in 1852 of a Mary Easter Barber and William Ezekiel Johnson at Lewisham, Kent. This has been checked and is not Mary Esther Barber, as the father is given as William Barber, a surveyor for H.M. Customs.4,5
Mary Esther Barber was a domestic servant in 1858.6
Mary Esther Barber died on 26 February 1858 at 44 Douglas Street, Deptford, Kent, England, at age 36. She died of pneumonia (12 days). Informant was Ann Waterman of 6 Wilson Street, Deptford, present at the death.6
Mary Esther Barber was buried on 6 March 1858 at Plot P17, Brockley Cemetery, Deptford, Kent, England, "Domestic Servant; 37 years; place of death: 44 Douglas St, Deptford; Plot P number 17". (Source: parish register.) 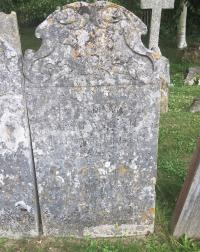