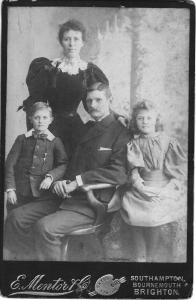 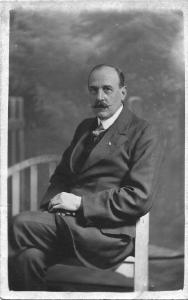 His daughter Doris always said that he died as a result of mustard gas from WW1. 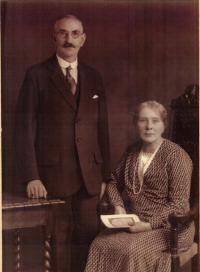 He was the son of William Little and Hannah Watson.
We know from the 1881 census that his daughter Elizabeth was a cousin to Jane Little, daughter of John Little of Carlise in Cumberland. The will of Jane Little, confirms that William Little is her uncle and that Elizabeth Little is his daughter. Therefore William and John were brothers. The ancestry for John Little (a Quaker family) has been traced back to his parents William and Hannah whose children were all born in Carlisle. John Little was a schoolmaster and later an accountant. He left a substantial amount of money (approx 8,000 pounds) in his will and his unmarried daughters appeared to have held shares in a railway company. The wealth appears to have come via John Little's wife, Elizabeth Wigham, the great granddaughter of Lord Cuthbert Wigham. John and Elizabeth's daughter Jane left an estate valued at over 19,000 pounds in 1888. Unfortunately no-one in the family married so there were no descendants, and as a result the money was spread widely on Jane's death, with some properties passing to William's daughter Elizabeth (who never married) and then upon her death to her sister Jane Little.2
William Little married Mary (?) circa 1824.
If William and Mary are the correct parents for Jane and Elizabeth then there is a possible marriage: 5 Jul 1824 William Little married Mary Dean at St Peter, Liverpool. However, there are reasons to doubt this William and Mary as the parents as we know the family were Quakers who did not baptise their children (but did keep records of births). The fact that their children were baptised in Liverpool St Peter therefore creates some doubt. It is possible that the Quaker (non conformist) records for Liverpool will show a different family. Also, this William's age is given as 21 years which is a bit late. This is a work in progress.3
For the 1851 census there is a William (55 years) and Mary Little (56 years) in Wetheral, Cumberland as visitors to John Sewell (farm labourer) and his wife Ann and family. This is interesting, because their daughter Elizabeth appears to have moved from London (1861 census) to Wetheral (1871 census). William's occupation is commercial traveller and his place of birth is Brampton, Cumberland. Mary was born in Crosby, Cumberland.4
William Little was a gentleman on 9 June 1862.5
William Little died before 1881 at England.2
William Little is mentioned in the will of Jane Little dated 3 April 1881 at Carlisle, Cumberland, England; See source reference for copy of will - not yet transcribed.2

Richard and Jane's first child was baptised at Hellingly (Jane's place of birth) and subsequently at Chiddingly. However, they do not appear in the 28 May 1821 census for Chiddingly. The baptisms of their children Jane (1822) and John (1824) at East Hoathly suggest they may have been living there at the time. From 1826 the baptisms resume at Chiddingly though.5
The 1839 tithe map survey identifies the location of Richard and Jane's cottage and garden at Holmes Hill as plot 810 near the intersection of the Lewes Road (now the B2124) and the road running between Whitesmith and Golden Cross (now the A22). The owner of the property was the parish, indicating that this was probably subsidised by the parish and part of their overall poor relief programme. The tithe map shows that the Bat & Ball pub is located at that intersection (on Lewes Rd) but the pub no longer exists.

The parish of Chiddingly is located in the Weald and was considered a poorer area for farming as the land is heavy and poorly drained compared to the South Downs where the chalk soil is lighter, well drained and easier to farm. Consequently, it was more difficult for agricultural labourers to secure permanent employment at Chiddingly. Seasonal employment also meant less opportunities for women and children. The result was a greater demand on parish relief at Chiddingly. Richard Funnell was an agricultural labourer, living in a parish house, and probably experienced these difficulties.6
On 7 June 1841 Jane Burgess and Richard Funnell lived at Holmes Hill, Chiddingly, Sussex, England.7